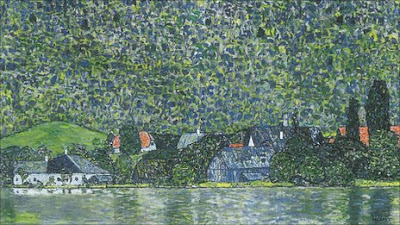 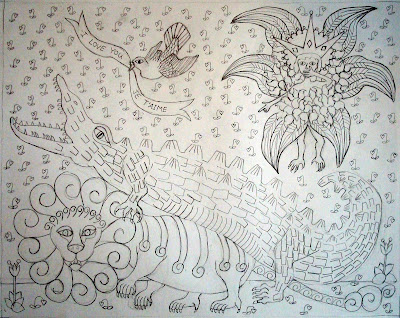 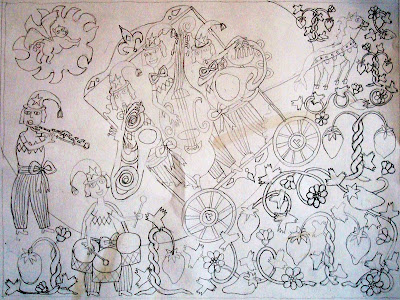 The first image is a landscape by Gustave Klimt. I really like this landscape because like Van Gogh's "Starry Night" the sky has as much action and excitement as the ground. In fact, I am currently in love with the sensation of an image completely filling the canvass with movement and detail. My drawings here are plans for paintings, but they don't look like most of the artwork I've done recently. There is more energy, which I think is because I'm on less medication. And I didn't incorporate images from photographs into my art - I relied totally on my own imagination. This makes them look more primitive, less polished, but the trade off is that if photographs aren't relied upon, the end result is a little bit more bizarre, and I think bizarre is good.

I don't know if I'll actually paint the first drawing, "I Love You", but I've already started painting the second drawing, "The Band and Strawberries". The problem with "I Love You" is that I think it is too boring. Oh, I would have fun coloring the scales on the crocodile and the swirls on the lion, but I dread the tediousness of painting all those little squiggles in the sky. Oh well, being bored to death is merely sometimes part of my painting process. I know one successful artist who does extremely detailed and repetitive work and he listens to books on tape while he paints. I can't do that because of my schizophrenia, I can't manage to split my concentration, what I do takes all of me or else I won't be able to do it for very long. I used to be divided on whether or not listening to music while I worked gave me an energy boost, but I've come to the conclusion that pure silence is best for my art. Uninterrupted concentration produces the best results.

Had a scary few hours yesterday.

Two days ago my husband and I went midnight bowling with another couple that my husband knows from work. The whole outing knocked my internal rythmes out of order. In anticipation of a very late night, and to negotiate the the slight stress of a social visit, I did an Elvis. This is where I take a prescribed narcotic (downer) and mix it with lots of caffeine (an upper). The Elvis put me in this weird zone were I was perfectly content and comfortable for the entire visit. Only my husband and I were so trilled with each other's company and having a night that was novel that we spent an additional two hours in bed talking when we got home, resulting in me going to bed around 3am. I slept that night until 1pm the next day.

Because my sleep pattern was thrown off, the next night I only slept 5 hours waking at 3:15am. And then later that morning I was uncomfortable. As in feeling crazy and anxious uncomfortable. So I said to myself, "Is this the beginning of low medication madness?" My thoughts were going so strong and so fast that I felt over alive, unbalanced, and mad. Nothing psychotic about my thoughts, they were normal, but they were so energetic and strong that it alarmed me. Of course it could be that I was only experiencing a variation of normal, but that I am so used to be in a sedated drugged state that a little sleeplessness is a new way of being. I have forgotten what it means to be in altered states of consciousness that fall between the perimeter of normal.

To sooth myself, and turn myself back to normal, I watched about three hours of television. It did the trick. I eventually felt whole and sane and myself again. They say that television is bad for you, but for me, it is a therapeutic activity in that it slows down my mind and gives me a mini vacation from life.

I met a schizophrenic girl once who told me that she liked it when the medication made her head empty. The way she said it kinda scared me. It was like she was embracing being a zombie. She was on a lot of medication because her illness caused her to think in very strange ways. They were trying to drug her into normal but the disease kept braking through. I remember going for a walk with her outside, and by the side of the road there was a little black piece of plastic, probably from a car. She pointed at it and said, "Look, a piece of a black man".

My husband has noticed that I am more emotional on less medication. Not neurotic emotional, just I respond quicker and with a little more depth to what he is saying. I do think I'm quicker to anger, but showing more affection as well. Now that's not a bad thing. I do have a friend who doesn't like my art on less medication, and sent me pictures that I had done on Zyprexa and Seroquil to illustrate when my art, in his opinion, had been strong. Now I'm only on Geodone, a much weaker drug to my perception. My art looks different. He pointed out the "chaos" of my artwork as being something negative. But fact is, I enjoy chaos at this point. I enjoy overabundance and no rest for the eyes very much. Of course there is irony. When the overabundance and no rest is a phenomena on paper I'm pleased, when it is the actual state of my consciousness and in my head I panic and feel "mad".

It is terrifying when you have for ten years embraced medication, found it a relief to be on medication, have championed medication for the mentally ill, and then do an about face. All I have is the negative reporting in one book that I read that long term medication makes you sicker and causes brain damage. My husband said that I should do more research. The problem is that this country is very pro-drugs, they are being relied upon as a quick fix and even alternative to talk therapy. There used to be a movement in psychology that madness was a spiritual crisis, a natural part of the evolution of the self. An unbalance no doubt, but not a disease, rather, a time when a person had to change character and grow or else drown. Dysfunction was the result of trauma, and now with the exception of PTSD the environment having any input into madness is disregarded. I know a woman who is in an unhappy marriage and experiencing depression, but she thinks about drug treatment instead of changing her circumstances. Very few people I believe would be willing to radically alter their life to reduce stress and enjoy more mental health.

I know a massage therapist who worked on very wealthy wall street businessmen. They would come to him for a massage and say, I'm so stressed, what can I do to relieve my suffering? The massage therapist knew that if he said, "come in to me to have more massages" that this would boost his business greatly. But instead he told the truth. He said, "change jobs". And his clients hated hearing that advice.

I know that when my husband went to the doctor because of upset stomach problems, it became quickly clear to them both that the upset stomach only happened at work, and was his body's physical reaction to job stress. The doctor suggested that for my husband's health, he change jobs. Long term, the kind of imbalance of stomach acid could lead to cancer. When my husband came home his attitude toward his doctor's advice was close to outrage. How dare the doctor suggest that he turn his life upside-down. My husband is simply unqualified to earn an income in any other field than where he is currently at. It is true, there have been jobs, especially that of working with the mentally ill, that he had found immensely rewarding, but he has no advanced degrees, and the income he would get at that type of job pales in comparison to what he is earning now. And he feels he has to earn a good income to support me.

My husband's stomach problems have happily resolved themselves. The doctor said that a quick fix was to take over the counter antacid tablets. What nobody knew was that when my husband stopped drinking every night he also stopped, except on rare occasions, having upset stomachs. Alcohol, even though it was only drunk after work, changed the chemistry of his stomach. Also we now walk every evening as soon as he gets home from work and exercise relaxes him and helps him to wind down from the hectic pace of his job. Finally, there is the fact that he has rather mastered his job, and is very good at it, and so, he has less stress because he knows most of the time what the answers are to his problems.

I am very scared to come off of my antipsychotics. I jump at any discomfort of the mind thinking "you are less medicated now, you are sicker now". So my plan is to go down one pill every three months at a time. The next lowering of dose should occur January 1st, 2012. I want time for my brain to readjust and I want time to go back on the medication should I start experiencing crises. Currently I am taking four pills a day, so this means if everything goes well a process of exactly one year. To be totally truthful I have little hope that I will ever get to zero pills. I predict that at some point, the internal drama of my life will disgust me, and the pain, the emotional pain will be too much to endure. I think that if I ask myself the deep question, "do you want to live for the now, or for the future" I will pick the present.

From what I've read, the medication imbalances the mind to such a degree that if you go off of it you are virtually guaranteed a relapse. It isn't your disease hitting you with a vengeance, it is the brain reacting to drug withdrawal. What people commonly mistake relapse for after drug withdrawal is proof that the disease had been cured or controlled, when instead, it is proof that you have become addicted to the drugs and without them, your disease is exacerbated. Long term, the research says that the drugs will also deepen the schizophrenia, causing more positive symptoms and more negative symptoms.

I simply don't know what to believe. The only solution is to push the boundaries of my situation, go outside my comfort zone, and see what happens. I really don't know how sick I am. I am sick, no doubt, but is it madness that I can live with?

It is a horrible, horrible thing wondering, as the medication lowers, at what point you are going to lose your mind.
Posted by Karen May Sorensen at 4:57 AM

In order to keep a neat and orderly blog, I am initiating comment moderation. Thank you.